Twitter has been the backchannel at the annual Institutional Web Management Workshop (IWMW) since 2008. I have been involved in formalising this backchannel as part of the amplification of the event for the last two years, which has entailed providing the official event Twitter commentary on the @iwmwlive account and being on hand to assist and relay questions for the remote audience. In response to accessibility concerns, we also offered a CoverItLive event as an accessible alternative to Twitter for members of the remote audience who could not or did not want to access the conversation via Twitter. CoverItLive provides a live blog to which users can post comments without the need for an account with the service. Last year there was little uptake for this additional channel, so when I suggested we use it again for IWMW10, I knew I had to make sure we made practical use of the facility to justify its inclusion in our range of amplification access points for the event. 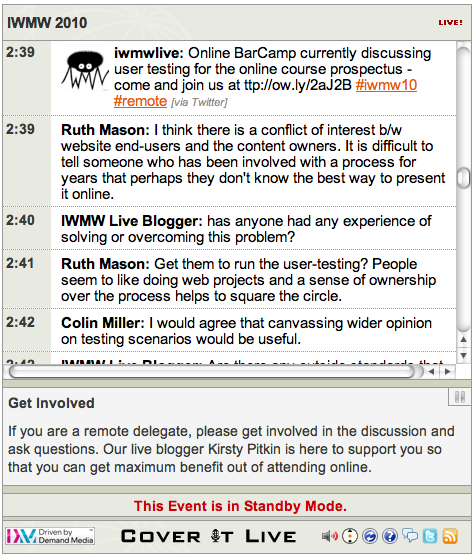 One of the main reasons I was keen for its inclusion is that I am acutely aware that amplification needs to go beyond Twitter. There are still those in the potential online audience – even for a web related event – who do not have a relationship with Twitter and are thus consigned to watch the conversations taking place there from the outside. I wanted to provide the CoverItLive alternative to give these people a space to access the conversation and make their own contributions without the need for a account login with any one service, or without the need to identify themselves in anyway, unless they chose to do so.

To make the option more prominent, I created a page on the event blog which displayed the CoverItLive session and links to the other live materials (including live video stream) and the event hash tag, with a short explanation. Remote delegates visiting the blog therefore had a natural and easily navigable link to the all of the live online resources in one place, including the embedded CoverItLive session. As a result we saw far more activity, with 120 views (compared to 27 in 2009) and 144 comments (compared to 1 in 2009).

Whilst this looks encouraging, I had a few observations about the way we used CoverItLive in practice which might inform future amplification experiments with this as a support tool…

I configured the CoverItLive session to provide a live blog of the event, drawing in tweets from the official @iwmwlive account and all tweets tagged with the #iwmw10 hash tag. I also used the news flash feature to provide important updates, which appeared permanently at the bottom of the window. Any polls also appeared in this space and rotated with any current news flashes. I invited online delegates to ask questions during each plenary session both via Twitter and directly in this live blog to encourage comment through this channel.

Despite the promising comment figures, people generally used the live blog to view, but not participate in the discussion. Only one person asked a direct question for the current speaker using this tool (and was delighted to hear it asked and answered over the live video stream), whilst there were only three other comments responding to points made. This may be because the active discussion was obviously taking place within Twitter, and twitterers could not see comments from delegates using the CoverItLive live blog, so there was no way of interacting directly. The number of updates from the hash tag was also so fast that comments often got swept away quite quickly, preventing any sustained dialogue around those comments from other live blog users. I found this when I tried to communicate directly with the audience within this space. Had there been less activity around on Twitter around the hash tag, there may have been more space to develop discussions between the live blog viewers. Once this problem became evident, I did poll the audience to see if they wanted me to remove the hash tag comments, but 67% said they found it useful. It is worth noting that the CoverItLive polling tool does not tell the administrator how many people voted so that this percentage could be put into context.

The majority of the 144 comments resulted from the online BarCamp, which I facilitated on Day 2. I explained the process in more detail on the event blog, but the basic premise was to gather available online delegates in the live blog for an open discussion around a topic of their choice to help share ideas and experiences. Whilst this was in session, I removed the hash tag tweets and did not issue any @iwmwlive tweets, so the live blog space was completely Twitter-free and focused on the discussion. There were 7 active participants in this discussion and 21 viewers in total, so there were still viewers who wanted to watch, but not contribute. However, natural discussion was much more successful, as the number of comments (made during a 1 hour window) testifies. In the absence of the many Twitter voices of those physically present at the event, there was also the opportunity for more sustained exchanges regarding the overall online experience of the conference – including issues with the live stream. This may have been because statements were not limited to 140 characters within the live blog, or because I, as an official representative, was obviously focused entirely on their concerns, rather than trying to tweet through a plenary session and field questions simulateously.

In terms of accessibility, I was also aware that whilst the hash tag comments were being displayed within the live blog, viewers had to understand the jargon of Twitter to make sense of the stream – including @replies and “RT”. How much of a barrier this may have been is unclear.

Based on this experience, I still feel that it is important to offer an alternative, login-free option for discussion and remote interaction with a live event, but it is important to monitor how this is working for your remote audience and adjust your strategy accordingly – especially if you want to foster the same level of discussion as Twitter engenders. This may mean displaying the Twitter stream of the event hash tag next to the live blog so the remote audience has the choice to read those comments, but views the live blog space as their own for direct discussion, or simply designating time to moderate a focussed discussion so the remote audience get to know each other, get familiar with the technology, gain confidence and get a dialogue going.

Talk to us about your upcoming event...

We are based in Bath and operate across the UK

Send us a message